June Almeida was the internationally renowned virologist who pioneered new methods for viral imaging and diagnosis, including the discovery of the Coronavirus.

When she peered into her electron microscope in 1964, she saw the virus, a grey round dot covered in tiny spokes. She and her colleagues noted that the pegs formed a halo around the virus—much like the sun’s corona.

What she saw would become known as the Coronavirus, and Almeida played a pivotal role in identifying it. That feat was all the more remarkable because the 34-year-old scientist never completed her formal education.

She left school at 16 without funding to go to study at a university. During her lifetime, she became internationally renowned for her skills using electron microscopy to identify viruses. Her work with the pathogenesis of viral infections enabled better methods for viral diagnosis.

On leaving school in 1947, June became a laboratory technician at the Glasgow Royal Infirmary. She and her husband, an artist, immigrated to Canada, where there was a vacancy in the Ontario Cancer Institute in Toronto for an electron microscopy technician. In Canada, it was then easier to gain scientific recognition without a university degree than in Britain. While visiting Toronto, Professor A P Waterson, from the St Thomas’ Hospital Medical School, persuaded her to join him in London in 1964. From this point her career skyrocketed. Three years later, she moved with Professor Waterson to the Royal Post Graduate Medical School (RPGMS). She received a Doctor of Science degree for the quality and importance of her publications. Most virology review articles and textbooks contain her electron micrographs of viruses.

She retired to Bexhill in 1985, where she trained and qualified as a Yoga teacher running several successful classes in the town. 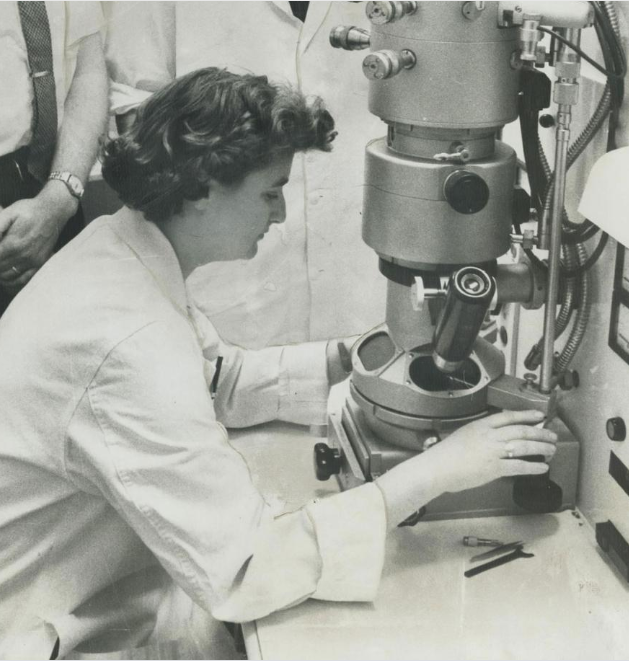 Scientists first identified a human coronavirus in 1964. It caused a common cold. Later that decade, researchers found a group of similar human and animal viruses and named them after their crown-like appearance.

June Almeida first identified a human coronavirus in the 1960s and attributed it as the cause of the common cold. Seven coronaviruses can infect humans; the most serious are:

The one that causes SARS emerged in southern China and Hong Kong in 2002 and spread to 28 other countries. More than 8,000 people were infected by July 2003, and 774 died. A small outbreak in 2004 involved only four more cases. This strain of the Coronavirus causes fever, headache, and respiratory problems such as a cough and shortness of breath. Most experts believe the SARS virus burned out because the virus did not like: 1. Sunlight, 2. Temperature, and 3. Humidity. A vaccination for SARS was in development when the virus disappeared. Camels may have been the primary source of zoonotic transmission. Analyses using anti-MERS-CoV antibodies have shown that 98–100% of camels were positive for MERS-CoV. The incidence of MERS-CoV in humans was 15 times higher in camel shepherds and 23 times higher in slaughterhouse workers than in the general population. This data supports that the main route of transmission was from camels to humans through the respiratory system.

Electron Micrographs used with permission from depositphotos.com and with Fair Use from Wikipedia   June Almeida from Natgeo.com in the free for educators use.